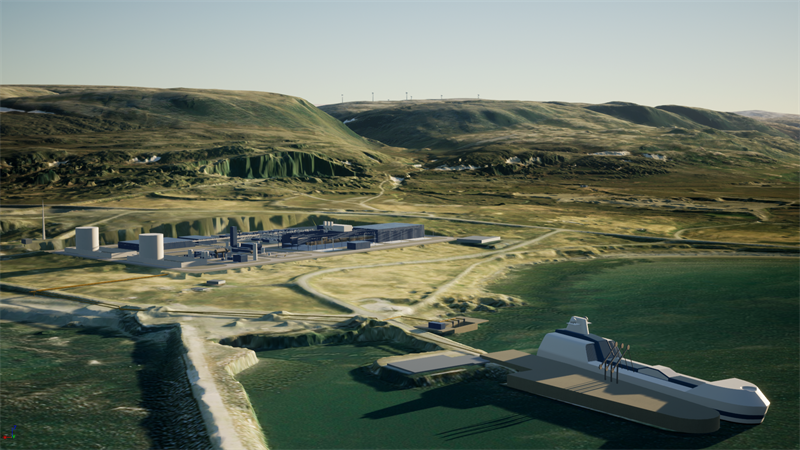 Aker Clean Hydrogen and Varanger Kraft’s project to build a green hydrogen and ammonia plant in Berlevåg in Northern Norway is accelerating towards its objective to decarbonize arctic shipping and off-grid power plants.

The green ammonia will be produced from water and renewable power from the Raggovidda wind park and replace traditional fossil fuels for ships, rigs and offgrid power stations, removing about 200,000 tons CO2 per year.

The project has now successfully passed the feasibility study and concept phase. The project design is based on a 100 MW hydrogen plant, but pre-facilitation of a potential future expansion to 200 MW, is being considered. The plan is to start producing green ammonia by the end of 2024.

“Our findings confirm that the Green Ammonia Berlevåg project is well placed to realize green ammonia production at scale to decarbonize arctic shipping and off grid power plants. The project continues to move forward towards becoming one of the first production plants of green ammonia,” says Knut Nyborg, Chief Executive Officer of Aker Clean Hydrogen.

The planned plant will be located north of the Arctic Circle in Berlevåg municipality with renewable power supply from Varanger Kraft's wind farm on Raggovidda close by. Norwegian authorities recently extended the licence deadline for Varanger Kraft to expand the wind power production capacity on Raggovidda wind farm until 2026.

“This is great news for us and our partners. The extended license deadline gives Varanger Kraft the opportunity to expand the capacity of Raggovidda to 200 MW with an additional 103 MW of wind power which in turn will result in higher supply of renewable power to the planned production plant in Berlevåg,” said Christian Bue, CEO of Green Ammonia Berlevåg AS, the recently formed joint venture between Aker Clean Hydrogen and Varanger Kraft.

A 2.5 MW hydrogen pilot facility is already in operation with power from the wind farm.

“We have just produced the first kilogramme of clean hydrogen in Berlevåg, and we already see promising synergies,” adds Bue, who is also the CEO of Varanger Kraft Hydrogen AS.

Rolf Laupstad, mayor of Berlevåg, sees great potential for positive local ripple effects from realizing the Green Ammonia Berlevåg project. “This project is crucial for us to reach our ambition of making Berlevåg an Arctic power centre of green development. We are committed to doing everything we can politically and administratively to help this project succeed,” says Laupstad.

Liv Monica Stubholt has been appointed Chairman of Green Ammonia Berlevåg AS. She has previously held several executive positions within Aker, is a former chairman of Varanger Kraft, and has been State Secretary in the Norwegian Ministry of Foreign Affairs and the Ministry of Petroleum and Energy.

Stubholt underlines the maturity of the project: “This is a well-advanced project with a real head start, positioning the company to capture opportunities in a fast-moving market. When developing the emerging hydrogen and ammonia industry, the geography of Berlevåg in the Arctic proves central rather than peripheral. I am confident that this project will contribute to the development of a full value chain hydrogen industry in Norway, including driving growth in the region,” she adds.

Aker Clean Hydrogen aims to develop, build, own and operate clean hydrogen production on an industrial scale. Aker Horizons is the majority shareholder of the company, and Aker Clean Hydrogen uses domain expertise across the Aker Group, including systems integration, engineering, technology development, project implementation, digitization and financial optimization to increase efficiency and reduce project costs. The company aims to reach a net installed capacity of 5 GW by 2030, and will make a major contribution to realizing the hydrogen industry and reducing greenhouse gas emissions globally. www.akercleanhydrogen.com